Somali troops kill over 100 militants as they capture fresh areas

Al-Shabaab did not release any statement responding to the government claims. This comes as SNA and local residents continue the assault on militant hideouts. 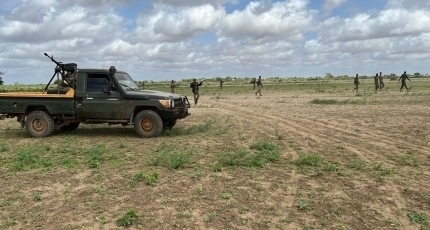 MOGADISHU, Somalia -  The Al-Qaeda-linked Al-Shabaab lost at least 20 towns to the Somali National Army [SNA] backed by the local civilians in Galmudug, Hirshabelle, and the Southwest States.

The allied forces killed over a hundred militants during the massive operation in Hiran, Galgadud, and Bay regions, according to a statement from Somalia's ministry of information.

Local public revolutions assisted by the government to liberate Al-Shabaab-controlled areas have been caused by the continuous atrocities by the terrorist group on the local civilians," reads the statement in part.

The ministry added that Al-Shabaab has been using the liberated towns for organizing its attacks, making explosives, and preparing suicide bombings aimed at targeting military bases.

The operations, according to the ministry of information will continue in Somalia until the SNA along with the residents removes Al-Shabaab from the remaining areas under the group's control.

Al-Shabaab did not release any statement responding to the government claims. This comes as Somali political leaders are meeting in Mogadishu for the second day on the war on terrorism and ensuring security.