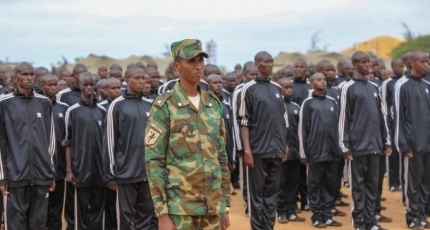 In central Somalia, federal troops supported by local fighters have been slowly seizing territories from al-Shabab since August. The current military offensive is entirely planned and executed by Somali commanders and local forces, a significant and confidence-boosting achievement.

“We inflicted a heavy defeat on terrorists, and we have dislodged them from large territory in the regions, Hiran in particular, which has been the focal point for the operation,” Army Chief Brigadier Gen. Odawa Yusuf Rage told VOA Somali.

“The ultimate goal is to remove these terrorists from Somalia and eliminate them.”

Gen. Rage and Defense Minister Abdulkadir Mohamed Nur were in Jubbaland this week to oversee regional forces that are planning to join the operations. The strategy is intended to open a new front against al-Shabab in the south.

Troops trained by Turkey and the United States are the core of Somali forces undertaking these operations.

On September 30, 2017, Turkey established the largest overseas military training facility in Somalia. Turkey has so far trained 5,000 commandos known as Gorgor (the eagle). To strengthen the command and leadership, Turkey also trained 316 officers and 392 non-commissioned officers.

The training courses are continuing, and army recruitment centers in Mogadishu are attracting young university graduates.

Gen. Rage, who himself was trained in Turkey, praised Ankara’s role. “It’s contributing significantly to the training and building of the Somali national army,” he said.

Rage said troops trained by Turkey have made a “significant difference” in the fight against al-Shabab.

The Turkish Defense Ministry said its engagement with Somali forces is to contribute to peace and stability in Somalia. It said the aim is to improve the organization, training, military infrastructure, and logistics systems of the Somali National Army.

“The battalions trained and equipped by Turkey have been successful in recapturing large numbers of al-Shabaab-controlled settlements, defending their bases, and neutralizing terrorists,” said a Turkish statement sent to VOA. “These battalions will form the backbone of the Somali National Army in the future. We believe that the personnel trained by the Turkish Armed Forces will serve not only the security of Somalia but also the security of Africa and beyond.”

The elite Somali forces known as Danab (lightning) are trained by the U.S., and they are the other major forces involved in ongoing operations. Danab force strength is inching closer to 2,000 including a new batch of 350 troops that started training just a few weeks ago at an airfield west of Mogadishu.

The government said it also is pursuing other initiatives to train more forces abroad.

Somali security officials have acknowledged that Turkish drones are participating in the operations against al-Shabab, by conducting bombings and monitoring the militants.

Two security officials who requested not to be identified because of the sensitivity of the project told VOA Somali that Turkish drones were involved in airstrikes in Lower and Middle Shabelle regions in recent weeks.

The presence of Turkish drones was confirmed in September by the Minister of Interior, Federal and Reconciliation, Ahmed Moallim Fiqi, who was speaking to a local television station.

But Somalia’s defense officials avoid confirming or denying it.

“That is not an issue I want to talk to about,” he said. “Whether it exists or doesn’t exist, I will answer another time, but at this time I have no information about it.”

Unlike the U.S. military, which has been publicly reporting airstrikes against al-Shabab for many years, including some that took place during recent operations, Turkey has not commented on its clandestine drone operations.

On the multilateral level, Turkey supports all efforts to increase the capacity of the Somali National Army, read a statement by the Turkey Defense Ministry. That statement did not mention the word “drone” once, although the VOA inquiry mainly focused on the drone issue.

But Somali officials said Turkish drones were effective in bombing al-Shabab when troops met stiff resistance from the militants.

Former Mogadishu intelligence chief Major Ibrahim Moallim Abdullahi, who has been following the operations of Turkish drones, said recent progress by the troops would not have been possible without the drones.
“Turkish drones are playing a significant role in the ongoing operations,” he said.

Abdullahi said Turkish drones arrived in the country last year, but their activities were limited to surveillance until this year when operations started.

What is the strategy?

Despite the success on the front lines, some security experts are questioning if the government has a “clear strategy” to defeat al-Shabab. Al-Shabab fighters this week penetrated a popular hotel next to the Presidential Palace, killing nine people. In October, the group detonated two large bombs at a busy junction killing 121 people and injuring more than 330 others.

Critics argue the government only joined up for the fight after local mobilizations developed in the Hiran region against al-Shabab. In addition, in the town of Wabho in Galmudug State, troops vacated after briefly capturing it.

“If you are starting a war, it needs a clear strategy, which has a starting point and an endpoint,” Abdullahi said. “What you need in liberated areas is to have the police, intelligence, and service providers ready in place.”

Defense Minister Nur rejects the idea the government approached this without a plan.

“It is a government plan that started it off, and there is no fighting that the government has not planned or led,” he said. “There is nothing spontaneous about it.”