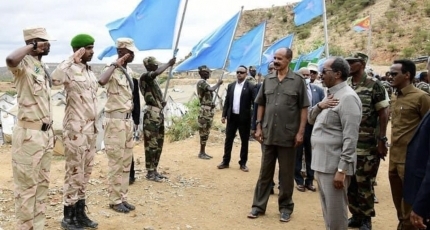 MOGADISHU - Somalia President Hassan Sheikh Mohamud said on Monday that soldiers training in Eritrea will begin returning home this month in an exercise expected to last until January.

For months, rumors have swirled in Somalia that the soldiers may have been deployed to the war-torn Ethiopian region of Tigray.

“Before the end of this December they will start returning (home) and in January their return will be completed,” Mohamud told a diaspora forum during a visit to the United States, a video of which was released by state media.

“We have set everything on that matter and God willing we don’t expect any delays after now.”

Mohamud, who had pledged to bring the soldiers home in his election campaign, visited them in training camps in Eritrea in July.

Families without news of their relatives in the army protested several times last year during the presidency of Mohamud’s predecessor Mohamed Abdullahi Mohamed, better known as Farmajo, demanding information about their whereabouts.

The UN special rapporteur on the situation of human rights in Eritrea, Mohamed Abdelsalam Babiker, in June last year referred to “reports that Somali soldiers were moved from military training camps in Eritrea to the frontline in Tigray, where they accompanied Eritrean troops” supporting Ethiopian federal forces against rebels.

In late May, Farmajo said his government had sent around 5,000 soldiers to train in Eritrea.

He said their training ended last year but he had decided to delay their return to avoid disrupting parliamentary and presidential elections.