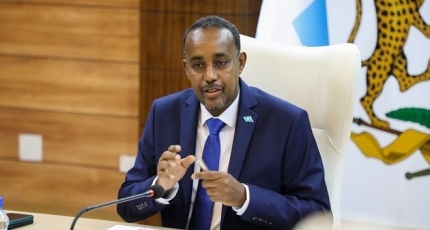 MOGADISHU, Somalia - Prime Minister Mohamed Hussein Roble has appointed on Saturday a committee tasked with the investigation of a recent UN report claimed that Somali soldiers have taken part in the Tigray war.

The five-member team led by defense minister Hassan Hussin Hajji will launch an inquiry into the report and the complaints by Somali parents who say they didn't hear their children since sent to Eritrea for secret training.

The families whose sons went missing have held protests in parts of the country, including Mogadishu and Galkayo, demanding the government to return the boys to their country.

The United Nations human rights report released last week was a bombshell and it came as Villa Somalia was trying the hide the truth and mislead the public with baseless information.

The Somali trainees estimated thousands in number, according to the report crossed the Ethiopian border along with the Eritrean forces to fight against the TPLF in the Tigray region.

Former NISA deputy chief Abdisalam Guled, citing Ethiopian intelligence sources said nearly 400 of the recruits lost their lives in the battle and the rest are held hostage in Ethiopia.

Abshir Bukhari, who is the deputy Senate speaker has accused Farmajo and Fahad Yasin, the head of NISA of being behind the recruitment and dispatch of the youths to a foreign country, describing the decision illegally and out of the army protocol.

Somalia's information minister Osman Dubba said last Thursday that no soldier took part in the Tigray war and pledged all troops will be brought back when their training is complete.