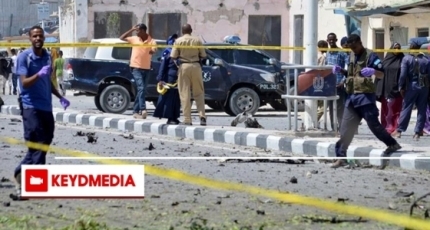 MOGADISHU, Somalia - Somalia is seeing a rise in attacks in the wake of the latest political crisis in the horn of Africa country between outgoing president Farmajo and PM Roble.

At least 20 explosions have been recorded in different parts of Somalia, most of them occurred in Mogadishu since Fahad Yasin, the sacked spy chief returned to the capital on September 21.

Here is the timeline of the latest explosions in Somalia this month:

September 14:  At least 11 people are killed in a suicide bombing in the Wadajir district, south of the capital after a suicide bomber targeted a tea shop at a municipal tax collection point.

September 19: The airport in the Bulo-Burde district of the Hiran region, was destroyed after it was hit by IEDs planted inside a newly built departure and arrival complex.

September 20: At least 3 people are killed and many more injured in a landmine explosion in Daynile district's Gubta neighborhood, north of Mogadishu.

September 22: A landmine exploded in a garage in the center of Marko town in the Lower Shabelle region, killing one civilian.

September 23: Former Barawe District Commissioner Aden Omar said an explosion at a military base in the Ambresso area injured at least seven soldiers.

September 24: An explosion in El-Wak, inflicted heavy casualties on Kenyan troops who are part of the AMISOM, injuring at least 20 soldiers.

September 24: A suicide bomber blew himself up near Medina Hospital in Mogadishu which killed only the suicide bomber, per the police.

September 25:  A deadly car bombing killed at least 8 people outside the presidential palace in Mogadishu amid political wrangles between top leaders.

The long-chaotic country witnesses more attacks since the ouster of Fahad Yasin as NISA director this month and this has raised questions about possible links between the former Al Jazeera Arabic journalist and Al-Shabaab, the Al-Qaeda's East Africa branch based in Somalia.

Yasin has previously been accused of having a role in the murder of Ikran Tahlil, a junior intelligence female official whose case has rocked the country after sparking a division and deadlock between Farmajo and PM Roble, the top leaders of the outgoing Government.

The security analysts believe that the bombings will go on as long as Fahad and Farmajo are still in power and the PM pursuing justice for the slain NISA officer as her family demanded.