The high-level talks come amid Al-Shabaab threat and devastating drought that affected half of the country's 15 million population. 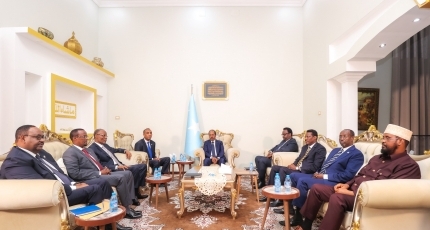 MOGADISHU, Somalia - As his country faces the Al-Qaeda-linked most powerful ally in East Africa, the president of Somalia Hassan Sheikh Mohamud says he is determined and committed to delivering his campaign promises.

After assuming office in May, the head of state initiated a wide-ranging consultation process that involves the leaders of the Federal States - Puntland, Galmudug, HirShabelle, Jubaland, and Southwest.

Today, Mohamud opened the 4th National Consultative council meeting in Villa Somalia, which focuses on the fight against Al-Shabaab, security, and federalizing the justice system of the country.

Political experts say this is imperative in order to keep Somalia on a stable political path and creates a united front against Al-Shabaab, which still remains the biggest threat to national security.

The national dialogue comes amid the Al-Shabaab threat and devastating drought that affected half of Somalia's 15 million population with the UN warning of famine in parts of the nation.