The incumbent has faced a big challenge after extending his term illegally by two more years early this year. 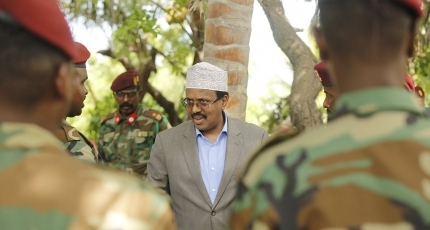 MOGADISHU, Somalia - The majority of Somali armed forces opposed and have actively resisted an illegal two-year-term extension by the outgoing president Mohamed Abdullahi Farmajo in April 2021, leading to the break out of violence in Mogadishu which displaced between 60,000-100,000 families from their houses.

The anti-coup troops have set up bases around the presidential palace in the capital, calling on the president to immediately leave the statehouse compound since his constitutional mandate expired on February 2021 without a successor in place.

Reliable sources confirmed to Keydmedia Online that Farmajo faced fears for his life following the army revolt against his unlawful extension and lost his faith in all sections of the country's armed forces, except his security detail made up of soldiers from his Marehan clan.

A luncheon meeting with members of presidential guards on the first day of Eid Al-Adha on July 20 has proved Farmajo's distrust of the army after the soldiers were disarmed before his arrival at the scene, according to a senior official privy to the event.

"A team from the office of the president reached the scene in advance who took the guns and pistols from presidential guard unit members in a coercive manner," said the official who asked not to be named because of the sensitivity of the issue.

Farmajo was unable to attend Eid prayer together with his people at Isbahaysiga mosque near the presidential palace or other places, as his predecessors had done, and this apparently showed that he failed to build the army's confidence.

Despite being in a position of the most-protected VIP person in Somalia, the incumbent began wearing bulletproof vests under his Shirt when going out for events just like the recent independence day commemorations on July 1 after facing security fears.

During his chaotic four-year term [2017-2021], Farmajo became the second leader in 10 years to split the national army into clan lines after late president Abdullahi Yusuf Ahmed.

In the past few months, several heads of state in the world were killed, including Chad's Idriss Deby and Haitian president Jovenel Moïse due to disputes over election issues.

Back in 2017, Farmajo two months after he assumed office, traveled to London, where he attended a forum on Somalia security. In his speech, he promised to reform and rebuilding the national army by integrating 18,000 troops from the Federal States to move the country out of dependence on the AMISOM forces.

However, he divided the army instead of making them great again to take over the security responsibility from the African Union soldiers who are expected to pull out by the end of 2021 after 14 years of service in the country.

The Turkish government has provided support to Somalia in the fields of security by training special forces, mostly in Mogadishu for the past four years but the soldiers have been used for political purposes by Farmajo who attacked opposition leaders, including his predecessors now running against him for the top seat in the upcoming election.