ONLF - Ogaden National Liberation Front (ONLF) has been fighting for decades in the Ogaden region for the rights of the Somali people in the north of Ethiopia who were victims of the TPLF. 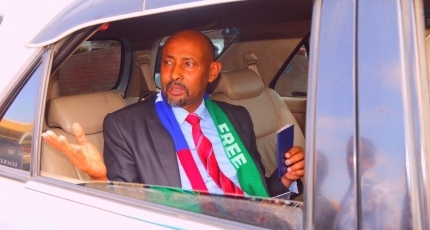 NAIROBI, Kenya – Somaliland, and Galmudug are in the limelight over the extradition of 280 ONLF members, including top commanders to Ethiopia for the past ten years, an official said.

ONLF spokesman Hirmoge Adani revealed that Somaliland is top of the Somali regions, where most of the members were handed over to Ethiopia while Galmudug came in the 2nd position.

Somaliland detained and deported 250, including members of the central committee, namely Garjubi, Abdullahi Qaji, Bishaaro Wacdi, and others, becoming the biggest puppet of Ethiopia.

According to the spokesman, Galmudug state in central Somalia has handed over 31 ONLF members, among them Mohamed Anni, Dhabuuke, and other key figures to Addis Ababa.

Puntland came in third place as it captured and extradited 30 operatives, making the total number of ONLF members deported from Somalia to Ethiopia 311, all ended up in torture jails.

The rendered members, including Abdikarim Sheikh Muse known as [Qalbi-Dhagah], who branded as a “terrorist and deported to Ethiopia in 2017 by the current Somali government.

He is a retired colonel born in Somalia. He was a member of the Somali National Army and fought in the 1977 war between Somalia and Ethiopia. After the civil war, he joined ONLF.

ONLF - Ogaden National Liberation Front (ONLF) has been fighting for decades in the Ogaden region for the rights of the Somalis in the north of Ethiopia who were victims of the TPLF.

Hirmoge said Djibouti was a major transit point for ONLF members deported from Somalia, bringing the total number to 74. Both Somalia and Djibouti are yet to comment on the claims.

This comes after the Somali cabinet on Sunday announced it removed ONLF from the terrorist list, rescinding a decision made previous government led by Hassan Ali Khaire in 2017.