The information indicates that there is a rift between the President of Somalia, Hassan Sheikh Mohamud, and the Heads of some State Governments who believe that a war is on the horizon for Villa Somalia. 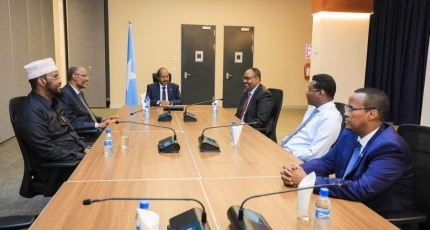 MOGADISHU, Somalia - High-level talks between Somali president Hassan Sheikh and the leaders of the five Federal States set to be held early this month in Garowe, Puntland capital flopped.

The meeting was expected to find a solution to the emerging differences between the two sides completely failed, according to a source within Villa Somalia, confirmed to Keydmedia Online.

The information indicates that the President of Somalia, Hassan Sheikh Mohamud asked Puntland leader Said Deni during his recent Garowe visit to host the conference and bring together all sides.

The failure come as some of the heads of regional states, including Southwest state leader Abdulaziz Lafta-Garen decided not to come to the meeting as his fallout with Villa Somalia worsens.

The reports add that things changed after the finance ministries of the regional states announced the suspension of all cooperation with the Federal Finance ministry after a dispute over the share of $100 million donated to Somalia by the World bank to deal with climate change, and drought and carry out development projects.

The president during his election campaign promised: "Somalia at peace with itself and the world". Upon assuming office, Mohamud paid a regional tour to Southwest, Galmudug, and Putland states.