No civilian casualties were reported from the blast, which aimed to target the embassy hotel where Galmudug security and administrative officials were staying. 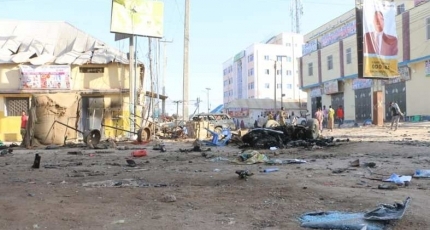 GALKAYO, Somalia - At least three people have been confirmed dead in an explosion in southern Galkayo on Tuesday night, the latest in series of terrorist attacks in the central city.

A Somali police spokesman said the blast happened after a man wearing a suicide vest exploded in an auto-rickshaw, he and two others were riding prematurely before reached his prime target.

No civilian casualties were reported from the blast, which aimed to target the embassy hotel where Galmudug security and administrative officials were staying.

Galmudug state president Ahmed Abdi Karie known as [Qoor-Qoor] and top regional officials were reported to be in the town for a security meeting. There was no immediate claim of responsibility.

Last December, at least 16 people died and dozens injured after senior military officials were killed when a suicide bomber attacked a stadium in the city of Galkayo, ahead of the planned arrival of the PM.

The central city which straddles the border between Puntland and Galmudug has been the flashpoint of clashes, assassinations, and suicide bombings that left dozens, including the Mudug region’s governor dead.

Al-Shabaab, an Al-Qaeda ally in East Africa has been waging more than a decade-long insurgency with an aim to oust the UN-backed Somali government and expel AU troops.