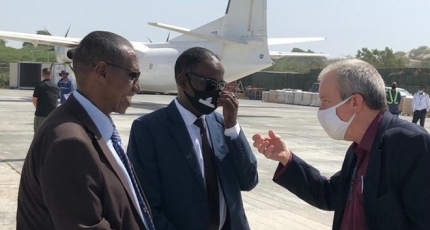 MOGADISHU, Somalia - The new US Ambassador to Somalia Larry Andre has arrived in Mogadishu today, almost a year after his appointment, according to a statement from the embassy.

We are pleased to announce the arrival of our Ambassador to Somalia Larry Andre,” said the U.S. embassy in Mogadishu, adding the new diplomat will work on enhancing bilateral ties between the two countries.

The new ambassador’s arrival comes amid a political and electoral crisis in Somalia, and the United States has previously threatened to impose sanctions on leaders who are seen as an obstacle to the country’s election.

The U.S. Senate on December 18 approved Larry Edward Andre Ambassador to the Federal Republic of Somalia, replacing Donald Yamamoto, who has been in office since October 2018.

U.S. has sent Stephen M. Schwartz to Somalia in August 2016 to serve as the first ambassador in the country since 1991, a year after the civil war broke out.

Somalia considers the United States a true ally in the fight against Al-Shabaab and rebuilding of the country’s armed forces. Washington trains the Danab brigade, an elite SNA force.