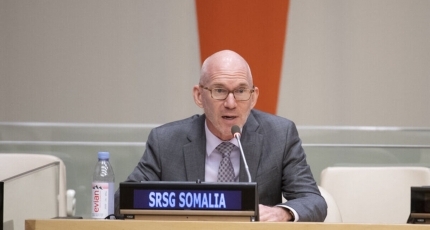 MOGADISHU, Somalia - The UN's envoy for Somalia James Swan briefed the Unites Nations Security Council on the general situation in the country on Saturday, UNSOM confirmed.

In his speech to the UNSC, Swan shed light on the soaring political dispute between outgoing president Farmajo and PM Roble which could have an impact on the election timetable.

The members of the UN security council voiced deep concern over the fresh political differences in Somalia and called for both top leaders to exercise restraint and initiate fresh talks.

The rival sides have been asked to give priority to the national interest, including security, and work together on how to hold a peaceful and transparent election in the country. this year

The brewing rift between PM Roble and Farmajo spiraled after NISA announced the death of Ikran Tahlil, a senior spy agent early this month after nearly three months of disappearance.

The PM sacked the intelligence director Fahad Yasin over the alleged murder, prompting Farmajo to suspend Roble's executive powers, a move the premier rejected as unconstitutional.

The international community is putting more pressure on both leaders to bring an end to their deadlock which threatens the hardly-gained progress in the security sector and state building.