On October 29, twin blasts claimed by Al-Shabaab killed at least 121 people and injured 333 others in the capital Mogadishu, the UN said, citing Somali figures. 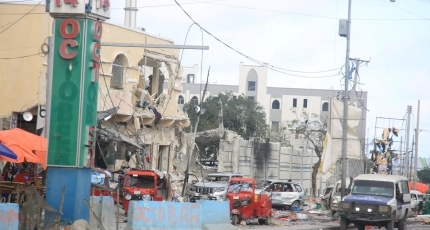 MOGADISHU, Somalia - The UN's human rights chief on Monday attacked a surge in civilian casualties in Somalia, largely due to attacks by Al-Shabaab jihadists, saying more than 600 civilians had been killed this year.

Volker Turk said the toll had worsened an already grim situation for people in Somalia.

At least 613 civilians have been killed and 948 injured so far in 2022, according to the latest United Nations figures -- the highest since 2017 and a more-than 30-percent rise from last year.

The UN said most of the casualties -- 315 killed and 686 injured -- were caused by improvised explosive devices (IEDs), at least 94 percent of which were attributed to Al-Shabaab, an Islamist group linked to Al-Qaeda.

Other casualties were attributed to state security forces, clan militia, and other unidentified actors.

"This year has brought an abrupt halt to a general decline in deaths and injuries documented since 2017," said Turk, the high commissioner for human rights.

"I am deeply concerned that more Somalis continue to lose their lives on a daily basis," he said in a statement.

"All parties to the conflict must uphold their obligations under international humanitarian law and ensure that civilians are protected.

"This also includes armed elements engaged alongside the government in the conflict against Al-Shabaab, as well as international forces."

On October 29, twin blasts claimed by Al-Shabaab killed at least 121 people and injured 333 others in the capital Mogadishu, the UN said, citing Somali figures.

It was the deadliest attack in the fragile Horn of Africa nation in five years.

The insurgents have been seeking to overthrow the fragile foreign-backed government in Mogadishu for about 15 years.

Somalia has been mired in chaos since the fall of president Siad Barre's military regime in 1991.

Al-Shabaab was driven out of Mogadishu in 2011 by an African Union force, but the group still controls swathes of countryside and continues to wage deadly strikes on civilian, political, and military targets.

The government is intensifying its fight against the Islamist group.