US agrees to increase size of Somalia’s Danab special forces

The specially-trained and equipped Danab forces have been active on the battlefields, carrying out covert operations inside Al-Shabaab strongholds in Somalia. 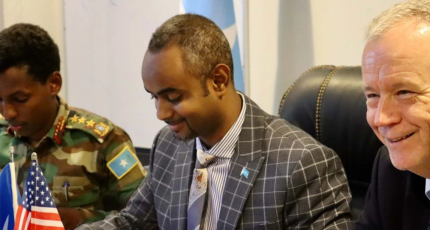 MOGADISHU, Somalia - The U.S. agreed to increase the number of service members of the elite Danab brigade of the Somali National Army [SNA] as the country is at war with Al-Shabaab.

The United States created the counter-terrorism force in 2014, seeking to get an effective unit within the SNA that can help its soldiers on the ground in the fight against terrorist groups.

The Training of the commandos had been carried out by Bancroft Global Development, a U.S. private military contractor, paid by AMISOM which is then reimbursed by the U.S. State Department.

The Somali army chief, Gen. Odowaa Yusuf Rage, and Minister of Defense Abdulkadir Mohamed Nur signed a deal to expand the size of Danab with the U.S.'s ambassador to Somalia Larry André.

Ambassador André met the Minister of Defense to confirm a new intake of SNA-Danab soldiers. New recruits will join the ranks of SNA-Danab to conduct future operations and work with local forces, police, and other partners to restore security for the people of Somalia," the US embassy in Mogadishu tweeted.

This new agreement comes with the recent visit to Somalia by the new commander of AFRICOM, Gen. Michael Langley, who has already promised to strengthen their operations in Africa.

The U.S. has been training and providing support to Danab for 8 years. The brigade currently has about 1,400 military personnel who is based in Beleddogle airbase in the Lower Shabelle region.

The highly-trained and equipped Danab forces have been active on the battlefields, carrying out covert operations inside Al-Shabaab strongholds in Somalia with the support of U.S. airstrikes.