The raid averted a planned Al-Shabaab attack, said the statement. The Al-Qaeda-linked group is yet to comment on the government's claims. 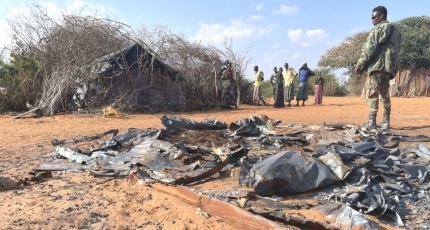 The Ministry said in a statement that the US-assisted raid was carried out in Bula-Madino village located in the volatile Lower Shabelle region, which borders the capital, Mogadishu.

Dozens of other militants were wounded in the operation and NISA – the National Intelligence and Security Agency played a role in the attack targeting the Al-Shabaab base.

The statement added that there an airstrike struck an Al-Shabaab convoy in the region.

The ministry said foreign partners believed to be Americans took part in the operation, which comes amidst a stepped-up military offensive against Al-Shabaab in Somalia.

The raid averted a planned Al-Shabaab attack, said the statement. Al-Shabaab is yet to comment on the government's claims.

Somalia launched a new offensive in August this year against Al-Shabaab with the help of Macawisley and the US stages airstrikes in the country as part of the counter-terrorism.