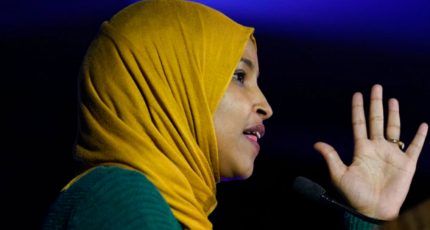 Omar, who was born in Somalia, has been visiting the country since Thursday. In Mogadishu, she met with President Hassan Sheikh Mohamud and Prime Minister Hamza Abdi Barre and members of the Cabinet and parliamentarians on Monday.

Speaking at a dinner in her honor hosted by Barre, Omar congratulated the Somali leaders for the “big success” against al-Shabab militants.

Omar called for collaboration in defeating the group she accused of “dishonoring” Islam.

“Our country and our religion have been associated with terrorism [because] of the dishonor they brought on us,” she said. “We have to get rid of them as Somalis and as Muslims and pray and support each other in that work.”

She said local Somali representatives have been able to visit their constituents for the first time since they joined the government because of the military operation that freed central territories from al-Shabab.

Somalia army chief Odawa Yusuf Rage told VOA on Monday that the operations are now expanding to the neighboring Galmudug region. He admitted that militants remain in small villages on the western side of Middle Shabelle close to the border with the Hiran region.

The militant group told Hormuud Telecommunication workers they are not allowed to travel between the areas controlled by the group and areas in the hands of the government, the military said. The restrictions also apply to the vehicles belonging to the company.

A spokesperson for the Somali military Brigadier General Abdullahi Ali Anod confirmed to VOA the restrictions imposed by al-Shabab on Hormuud Telecom.

“We heard that, we have received it,” he said in an interview.

He said Hormuud has been repairing telecommunication centers, and masts and restoring services in newly recaptured territories. “They are on standby, wherever the army arrives,” he said.

Hormuud Telecom has not commented on the reported restrictions.

Anod said the extremist group also wants to prevent the public, including pastoralists, from passing information about al-Shabab movements to the army and police.

Anod said the group has the false belief that the army is using the telephone network for their operations. “The army has its own communication. It’s possible that they don’t know that,” he said.

“They are punishing the companies and the general public,” Anod said.

The Somali government reported it has seized nearly 70 localities from al-Shabab since August when operations by the military and allied local militia started. Anod said they recorded 11 incidents where the group destroyed telecommunication masts and phone centers in areas seized.