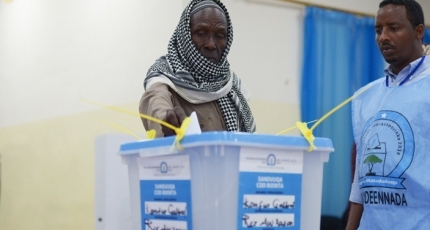 MOGADISHU, Somalia - The Union of the presidential Candidates voiced concern over endless delays in Somalia's elections, which were scheduled to culminate on October 10th.

The opposition alliance said in a statement on Monday that the postponement in the vote had left the country in a state of constitutional vacuum and uncertainty about the future.

The lack of election for new parliament and president to take charge of the country has negatively affected the political stability, economy, and security, according to the candidates.

"The candidates regret that the agreed election timetable has been delayed three times, without explaining to the Somali public the reasons for the setback," the statement said.

They have accused the National Consultative Forum which is made up of the Somali federal government and its member states who are steering the election process in Somalia.

This comes amid a political standoff between the outgoing Somali president Mohamed Abdullahi Farmajo and the PM Mohamed Hussein Roble who are fighting for control of Somalia.

The hope of the people is fading due to the current situation which is responsible for Farmajo who failed to lead Somalia to peaceful and inclusive elections at the end of his term in Feb.