Why the president of Somalia is visiting the Twin Cities

he growth of Minnesota's Somali population dates back to the 1990s when the U.S. began approving visas for refugees fleeing civil war, per the Star Tribune. 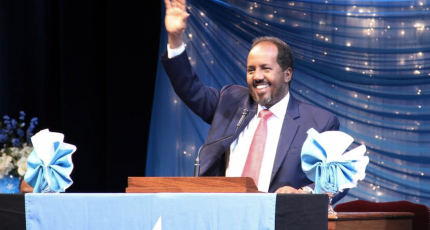 The big picture: The visit to Minnesota, which is home to the largest Somali community in the U.S., comes amid a challenging period for the East African nation.

Many in the local Somali diaspora have been closely watching the ongoing conflict between the government and the extremist militant group al-Shabab, as well as a drought-fueled hunger crisis that could soon be declared a famine.

What they're saying: Hashi Shafi, a local social justice organizer helping to coordinate the event, told the Sahan Journal that the local community wants to hear Mohamud address their "concerns about what is going on in Somalia — about the war [and] the violent extremists who want to destroy our home.”

Flashback: Mohamud, who was in Washington, D.C., this week for the U.S.-Africa Leaders Summit, last visited the Twin Cities in 2014, during his first term as president. At the time, he called on members of the local community to refrain from giving money to al-Shabab and to protect their children from the group, per MPR News.

Context: The growth of Minnesota's Somali population dates back to the 1990s when the U.S. began approving visas for refugees fleeing civil war, per the Star Tribune.

Local agencies such as Lutheran Social Service and Catholic Charities helped refugees arriving in Minnesota. Word spread that the state was a welcoming place with available jobs, experts and historians say, attracting more families to the region.

By 2019, Minnesota was home to more than 69,000 Somalis, per U.S. Census American Community Survey estimates.

Of note: U.S. Rep. Ilhan Omar, the first Somali-American member of Congress, is expected to be among the local officials attending Thursday's event.

Omar told Axios in a statement she is "excited to welcome [the president] to our beautiful state of Minnesota so he can meet directly with diaspora leaders, hear about the contributions Somalis have made to the state ... and find new opportunities for our communities to engage together."

What to expect: Doors open for the free event at 4 pm. Mohamud's speech is expected to begin later in the evening, per Sahan Journal.

Security precautions are expected to include metal detectors and bag checks.