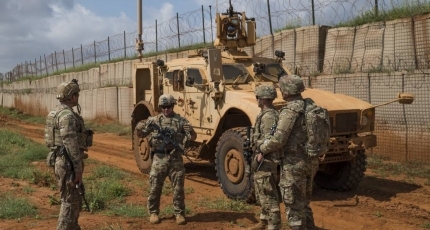 WASHINGTON - The US is to re-establish a “​​persistent” military presence in Somalia after Joe Biden gave the green light to reverse a Donald Trump-era decision to withdraw troops from the east African nation.

Washington will send up to 500 soldiers to “train the country’s army to combat the increasing threat posed by al-Shabaab militants”, The Guardian reported.

A US official told the Financial Times (FT) that the Islamic insurgency group had become the “largest” and “best-financed of al-Qaeda’s global affiliates”. The unnamed official added that “the pace with which it engages in attacks, and often lethal attacks, is quite appalling”.

The decision to redeploy US troops in Somalia marks a reversal of a decision by Trump “in the last weeks of his presidency” to “withdraw 750 US troops who had been stationed in Somalia until then”, The Guardian reported.

A senior Biden administration official told the paper that Trump’s “abrupt and sudden transition” to a rotating deployment of troops was “irrational”.

Since then, al-Shabaab has “grown stronger”, the source continued. “It has increased the tempo of its attacks, including against US personnel.”

The White House insisted that the move to reverse Trump’s decision does not contradict Biden’s “policy of disengaging” from “forever wars”, stressing that the US military presence would be “persistent” rather than permanent.

Biden has also “approved a Pentagon request for standing authority to target about a dozen suspected leaders” of al-Shabaab, The New York Times (NYT) said.
That also marks a shift in policy, as since the president took office airstrikes have “been limited to those meant to defend partner forces facing an immediate threat”.

Since Trump gave the order for a withdrawal, US troops have repeatedly “dipped in and out of the country to aid counter-terrorism operations on a rotational basis”, the FT said. An official told the paper the decision to formalize this assistance was “a step that rationalizes what was essentially an irrational arrangement that we inherited”.

“It was irrational because it created an unnecessary and elevated risk to US forces as they moved in and out of the country on a rotational basis, and gave us less pay-off for incurring that risk,” they added.

The president was elected on a pledge to end America’s “forever wars” in the Middle East and was harshly criticized for the “botched” Afghan withdrawal.

“He takes seriously his obligation to ask tough questions and to make sure he understands the full ramifications – the risks as well as the potential benefits,” an official told the paper. “Once he worked through that process, once he had his questions answered, he was ultimately comfortable approving this proposal from the secretary of defense.”

As well as carrying out “frequent deadly attacks in Somalia”, al-Shabaab has masterminded “atrocities in neighboring countries”, the FT said. This includes a 2019 attack in Nairobi in which 22 civilians were killed and “a 2020 attack on a US base in northern Kenya in 2020 in which three American servicemen were killed”.

Since taking office, Biden’s White House has sought “to be more surgical in their approach to counter-terrorism”, the paper added, “shying away from open-ended deployments around the world”. And a senior official suggested the Somalia deployment will be no different, saying: “We don’t plan on being there forever.”

The strategy “is to try to reduce the threat from al-Shabaab by suppressing its ability to plot and carry out complicated operations”, the NYT said. This comes with stated aims, including “targeting a small leadership cadre” made up of people “suspected of playing roles in developing plots outside Somalia’s borders or having special skills”.

Some have attacked the decision to redeploy troops into a complex and fast-moving battle against overseas terrorism. These critics include Sarah Harrison, an analyst at the International Crisis Group, who is the lead author of an upcoming report on US policy in Somalia.

“Sending in more US troops and honing in on a small number of senior al-Shabaab leadership is narrow in its aims and by definition cannot end the broader military fight,” she warned. Instead, what is needed is “more concerted and effective diplomatic and political efforts by the United States and others”.

The announcement was made to coincide with the selection of a new president in Somalia following a protracted election process that was 16 months overdue.

A vote confined only to members of parliament due to fears of national instability will mean former leader Hassan Sheikh Mohamud will return to the office, replacing Mohamed Abdullahi Mohamed who has been in power since 2017.

Peter Pham, a former senior US official in Africa and distinguished fellow at the Atlantic Council, told the FT that the undiplomatic election raises concerns that the groundwork is not in place for a “successful” US-Somali partnership on terrorism in Africa.

But a member of Mohamud’s incoming administration welcomed the move, telling the NYT that it is a timely deployment that “coincides with the swearing-in of the newly elected president who would be planning his offensive on al-Shabaab”.