The late former Somali dictator Mohamed Siad Barre denied the Somali people in Af-Barwaqo their right of getting a district after filling all requirements in 1988. 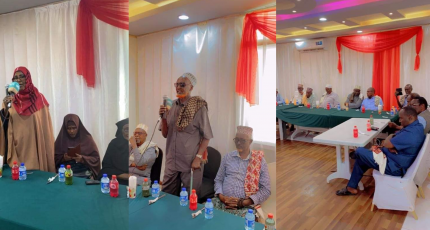 After a series of consultative meetings, the Reer Nima'ale diaspora in several countries in Europe, Asia, Africa, and the US welcomed the decision after having seen Qoor-Qoor’s bias, nepotism, and favoritism.

In a statement, the sub-clan called on the Somali Government to urgently intervene in the power abuse by Qoor-Qoor who failed to lead an administration that is serving all people.

Reer Nima'ale said it is complaining about injustice, prejudice, and hatred by the Qoor-Qoor administration which neglected the constitutional rights for Af-Barwaqo to become a district.

Af-Barwaqo is a historic and strategic settlement located in the eastern Mudug region, which has been excluded from a number of localities recently promoted to the district.

“Qoor-qoor came up with a Mafia culture, he has overstepped the constitution, and at the same time, he denied the community their basic rights,” said the statement.

The late former Somali dictator Mohamed Siad Barre denied the Somali people in Af-Barwaqo their right of getting a district after filling all requirements in 1988.

As elders confirmed to Keydmedia Online, Af-Barwaqo has had a municipal decree issued just 34 years ago by ex-Minister of Interior Ahmed Saleban Dafle who worked under the military regime, but Qoor-Qoor declined to complete the remaining and give the green light.

In addition, the elders said the regional state’s leader is plotting plans to run the incident coastal city of Hobyo on the Indian ocean against the will of the local people.

The elders warned of conflict among the residents as a result of the Qoor-Qoor’s divisive steps. They said the city wants development services, unity, and reform, not sowing a division.

Reer Nima'ale’s grievance has led to a cut-off of electricity to Galkayo for three days after soldiers from the sub-clan protesting against the injustice took over all checkpoints. The brewing crisis needs swift Somali government intervention.

Reer Nima'ale is known for being a founding community of the Galmudug state, and belonging to the first President Prof. Mohamed Warsame Ali (Kimiko), and the famous Somali freedom fighter Abdullahi Ise Mahoud, who is credited for playing a big role in the struggle to free the country from colonialism.

Qoor-qoor has in mind one thing that is he will not return to the Galmudug presidency after having oppressed most of the clans and communities in the two regions of Mudug and Galgaduud, which make the current Federal State in central Somalia.

He abused the rights of most of the clans, and his ambition is to make money using every means to reach his goal, including the embezzlement of public funds.