AU initiates changes in its peacekeeping operation in Somalia

Next Monday, the 7th of March, marks the 15th anniversary of AMISOM. Internationally, the mission is widely seen as a success in stabilizing the country at a time when it was in the grip of a civil war in 2006 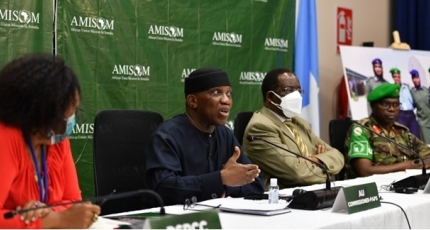 In a press conference on Monday, AU Commissioner for Peace & Security Bankole Adeoye, introduced the new transitional force, underlining its temporary nature: “ATMIS will have a character of a mission with an end goal, and that end goal is to transfer the full responsibilities of security to the federal government of Somalia”

Furthermore, Commissioner Adeoye has announced the transitional mission to be entirely in line with the Somalia Transition Plan (STP). The STP outlines a gradual transfer of responsibility from international stakeholders to the Government of Somalia by 2023.

Critics suggest that the African Union, under continuous pressure to remove its AMISOM force, has simply rebranded its existing mission. The responsibilities of the ATMIS overlap, almost entirely, with that of AMISOM. According to Commissioner Adeoye however, the new mission aims to put Somalian interests at the helm of its operations.

Next Monday, the 7th of March, marks the 15th anniversary of AMISOM. Internationally, the mission is widely seen as a success in stabilizing the country at a time when it was in the grip of a civil war in 2006. Al-Shabaab, the Al-Qaeda-linked Islamic terrorist group, has been ousted from Somalia’s key cities and towns. With the help of AMISOM, government forces were able to recapture Mogadishu’s airport, seaport, and government buildings in late 2011.

Along with a de facto extension of an African Union peacekeeping mission in the country, comes some reform in the military and political workings of AMISOM. The reformed ATMIS will be reviewed every 6 months, requiring further approval from the United Nations, the European Union, and the Somali Government to continue operations.

Additionally, Commissioner Adeoye, vowed to place all ATMIS forces under the control of a Ugandan Force Commander. According to IPI Global Observatory’s Colin Robinson, troop-contributing countries (TCCs) were virtually “fighting their own separate wars for their own reasons under the AMISOM banner”.

Uganda is the largest TCC. The remaining TCCs include Kenya, Ethiopia, Burundi, and Djibouti. The introduction of ATMIS has piqued the interest of other potential contributing countries, including Egypt, Tunisia, and Rwanda who have all contributed in past AU peacekeeping missions.

The alleged rebranding of AMISOM to ATMIS mirrors the UNs renaming of its peacekeeping operations in Congo. A lack of progress, despite the continued presence in the country, led to a desire for change, even though the political causes for trouble had not changed.

Despite this criticism, a renewed political willingness from the Somali side to cooperate with regional and international actors may mark a new era in Somalia’s politics. The Head of AMISOM, Ambassador Francisco Madeira, has called for participating states to “remain focused…and united in their common purpose”.

Somalia is due to finish its lower house of representative elections on the 15th of March, after which its parliament elects a President. The elections have been tainted by continuous Al-Shabaab operations, including those targeting parliamentary candidates. Commissioner Adeoye indicated that a new mission will be equipped to tackle this recent surge in Al-Shabaab activity: “ATMIS will have a mobile and agile force that can rapidly degrade, eliminate and decimate terrorists”.

The introduction of the ATMIS is subject to the approval of its mandate by both the AU Peace & Security Council as well as the UN Security Council, which is due to debate the issue later this month.