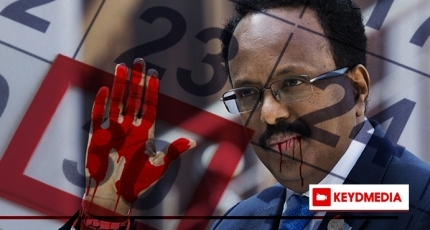 The party is aware that the Bossaso war is being fueled by the Somali presidency, especially the outgoing president.

The party, led by opposition presidential candidate Abdirahman Abdishakur Warsame, noted that since Farmajo took power in early 2017, there have been civil wars in different parts of Somalia, including Guriel, Beledweyne, Baidoa, Beled-Haawo, and Dhusamareb.

The statement obtained by Keydmedia Somali Service further stated that Villa Somalia played a big role in the conflict, and instead of working for reconciliation it preferred to incite civil strife which comes amid election crisis in the country coupled with the Al-Shabaab threat.

The political party said it was "deeply saddened" by the three-day fighting in Bossaso, the main economic source of Puntland which resulted in deaths, injuries, and mass displacement, and called for a peaceful dialogue as the only way to end the bloody hostilities.

The dismissal sparked a power struggle at the US-funded counter-terrorism agency which received missions of dollars each month from the Pentagon in the fight against Al-Shabaab and ISIS terrorists in the Bari region.