Abdikarim Muse “Qalbi-Dhagah” lands for the first time in Mogadishu since his 'illegal extradition' to Ethiopia by Hassan Ali Khaire's led government. 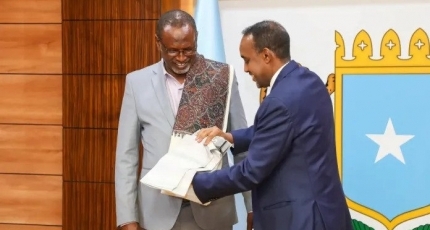 The ONLF commander was welcomed by government ministers and other senior officials at the Adan Adde International Airport, where he was forcefully extradited from while blindfolded more than four years ago to Ethiopia.

The Somali parliament later declared the extradition of Abdikarin Qalbidhagah to Ethiopia to be unlawful and unconstitutional, but the Cabinet led by then-Prime Minister Hassan Ali Kheyre rejected the ruling.

During the term of Farmaajo’s first Prime Minister, Hassan Ali Khaire, ONLF, and its members, including “Qalbi-Dhagah”, were branded as a terrorist group by the Somali government.

In previous statements, Qalbidhagah talked of 'the betrayal' he suffered at the hands of the Somali government after the Ethiopian government released him without prosecution.

ONLF describes itself as a national liberation organization fighting for the rights of the Somali people in Ogaden, Ethiopia.

ONLF - Ogaden National Liberation Front (ONLF) has been fighting for decades in the Ogaden region for the rights of the Somali people in the north of Ethiopia who were victims of the TPLF.